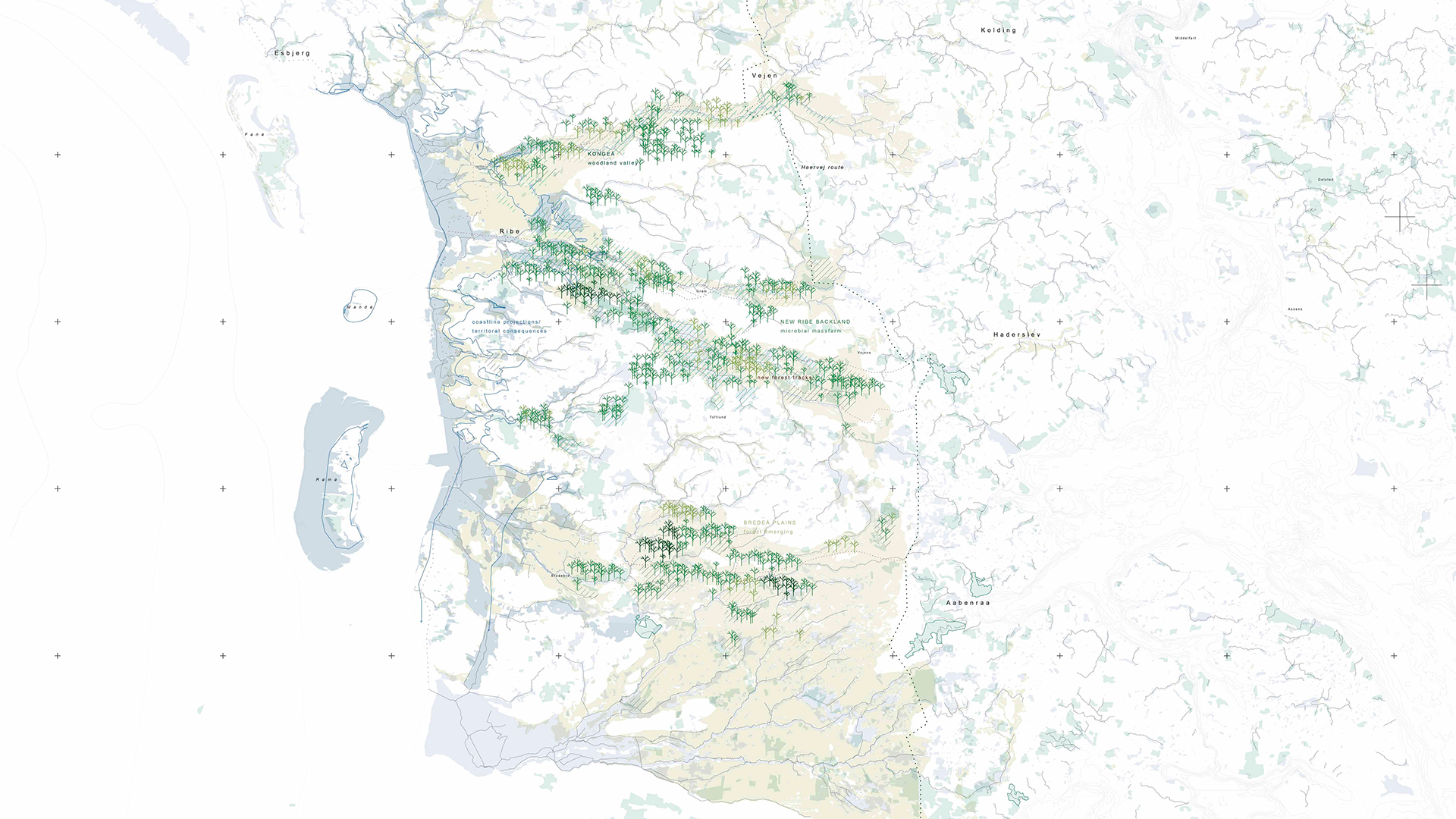 " It is different to fully understand the present. [....] Things may indeed take time in the Danish landscape, but time inevitably also takes things " - Steen Høyer

Johanna Bendlin studied Landscape Architecture and Urban Design at TU Berlin and KADK where she developed her interest in architecture for and of the more-than-human. We congratulate Johanna with her master's degree!

What is your thesis about?

My thesis  ‘Down to Earth- Growing horizons’  investigates soil beyond the perception of surface as an interface between the four spheres of the Earth’s system: Atmosphere, biosphere, lithosphere, and hydrosphere. In their dynamic interplay, soil, the pedosphere, develops and forms the skin of the Earth. The project introduces concepts relating to pedogenic processes, the composition of Danish ground, and proposes a new landscape connection in southern Jutland, Denmark. The work is supervised by Rikke Munck-Petersen.

Being the central interface of the Earth’s critical zone – through that all material production has to pass – made soil a valuable strata to explore. Scales of investigation range from geological, to centennial timescales (climate change) and decades (land-use change). Spatial scales ranging from tectonic regions to soil particles.

How can the understanding of soil as an interface support a holistic landscape architectural practice and be used to re-imagine modes of working the land in future earth-human systems?

Today’s soils are characterized by human alteration. The productive focus on land (yield) constrains the natural functions, like holding and storing, and leaves the land vulnerable to the effects of changing climatic conditions. The thesis draws attention to the rural landscape. The low lying plains in south-western Denmark are the concrete object of investigation. Today, climate change already expresses itself here as more extreme weather conditions and people fear for their existence due to eroding and flooding lands. The proposal ‚Growing horizons‘ connects the local conditions to a greater narrative of planetary survival. 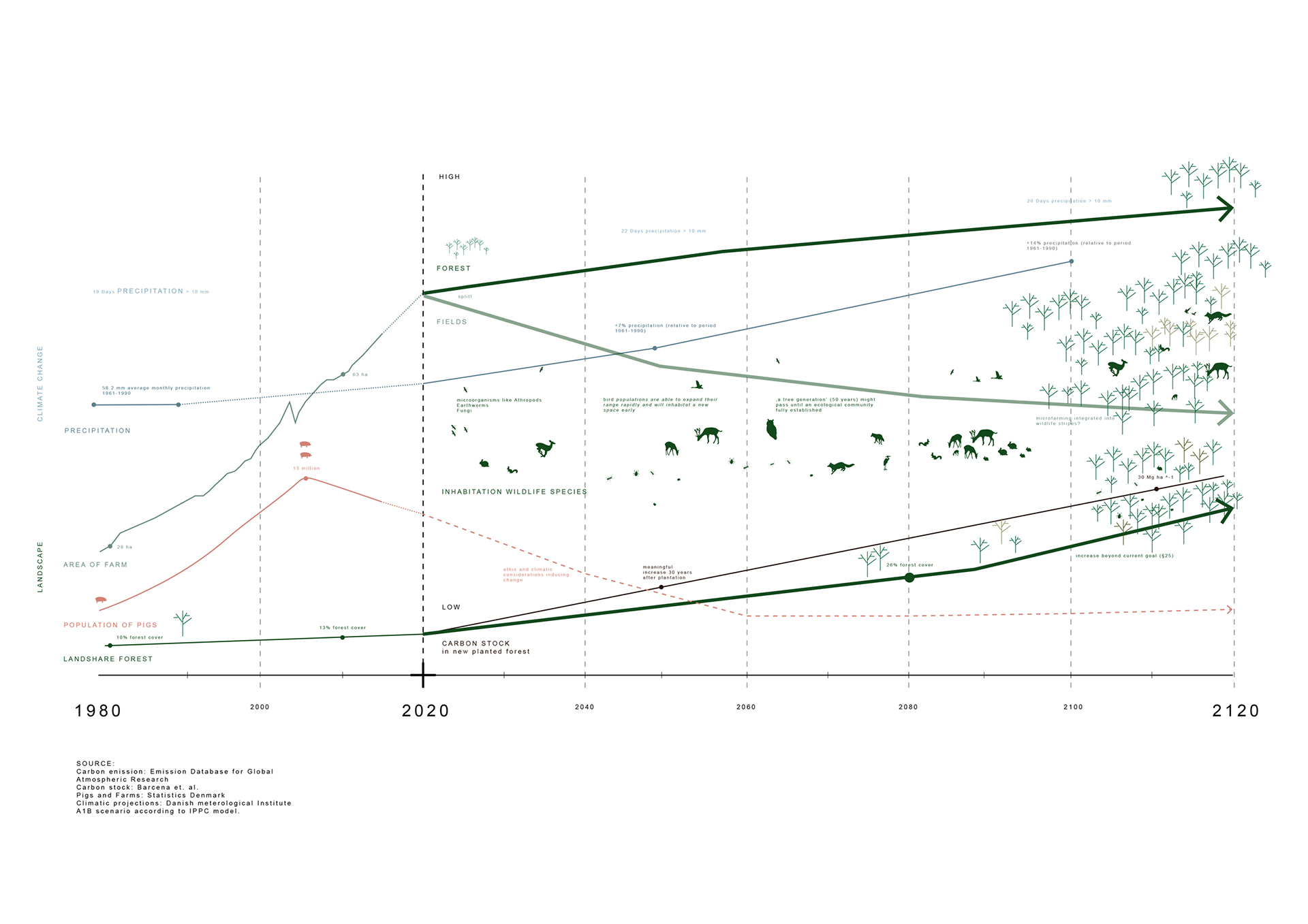 Diagrammatic timeline: Implementing afforestation as a new mode of working the land where productiveness is measured in humus, carbon, and water. By Johanna Bendlin 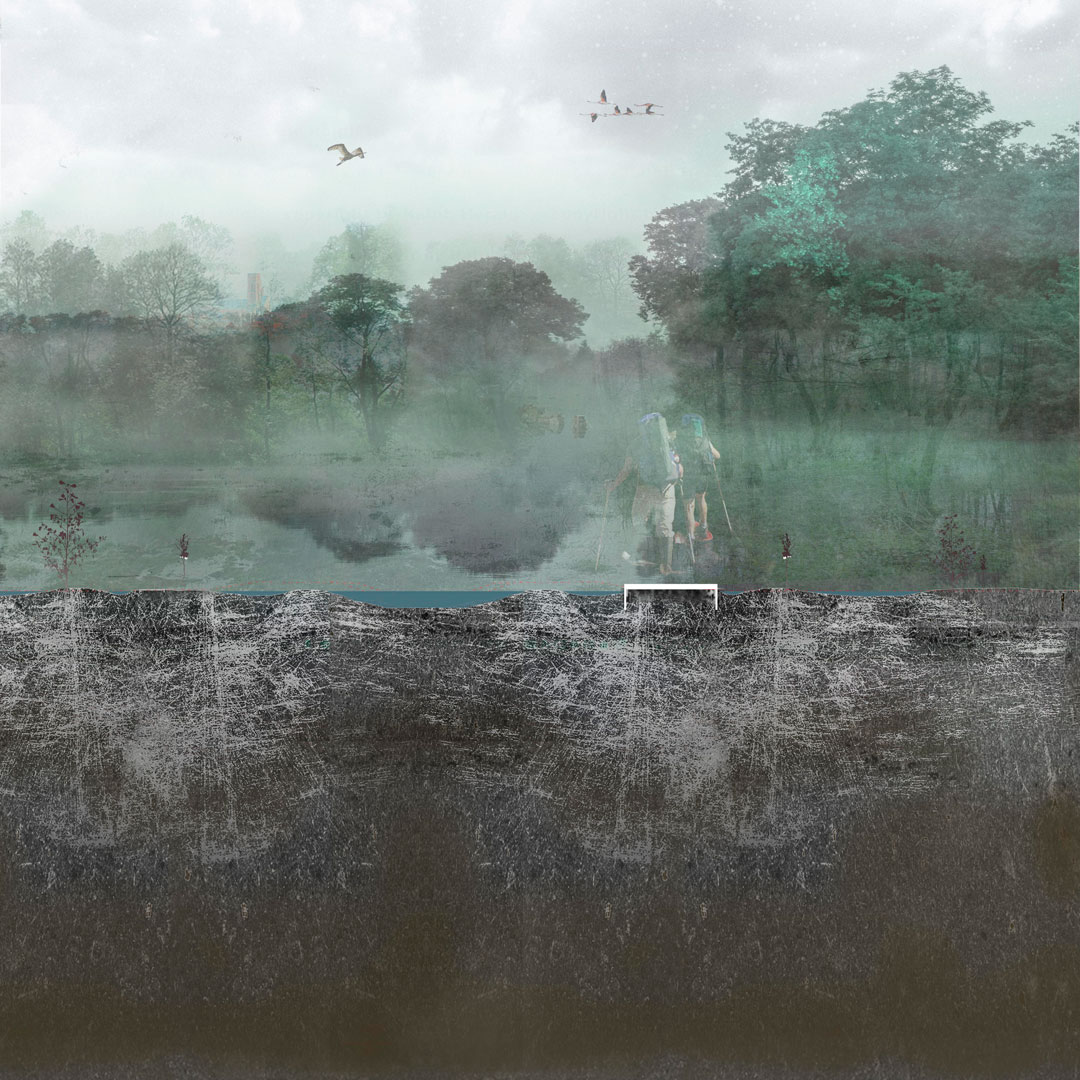 Goal is to design a framework for new interactions between geology and future climatic conditions. The strategy proposes to set low-lying grounds out of agricultural production. Constituting mainly sand soils they are performing worse for farming already today and are subject to flooding. ‘Growing horizons’ envisions a network of wetland woodlands. While the large scale afforestation initiates pedogenic processes and boost the storage capacities of the ground for carbon and water, horizons of soil and a canopy of trees grow simultaneously.

The streams Kongeå, Gram Å, Ribe Å, and Brede Å become generators for the creation of life. As a new east-west connection the network of the three proposed forest types is boosting both local ecology and the region’s function as a recreational destination itself. New hike and bike routes through the woodlands link local highlights and connect the nature reserve of the Wadden sea and the ancient Hærvej track on regional scale.

The two situations ‘Microbial massfarm’ and ‘Millennial harvest’, in the backland of Ribe show how territory will change according to the proposed strategy. Hardly perceived as artificial today the landscape has been dehydrated through a network of dikes and canals – a system that reaches its limits. Water is allowed back in the landscape and fields are left fallow, pig farming returns to the outdoors. As organic matter starts to accumulate and microbes start to inhabit the underground billions of bacteria, fungi, vertebrates and invertebrates species become engine of decay.

I explored the rural land as a new typology and scale to work in. Soil supported the understanding of interdependencies between over- and underground as well as between human and non-human species. I ‘used what I have learned’ in my undergraduate and graduate studies of Landscape Architecture by making the gained knowledge on systems of nature and ecology applicable for design. Cosmic-thinking, in its very abstraction, enabled me to set past and future in new relation and imagine the strategy of ‘Growing Horizons’. This made for a more powerful design. Here I see myself continuing. Working for a context that is always much bigger than us. 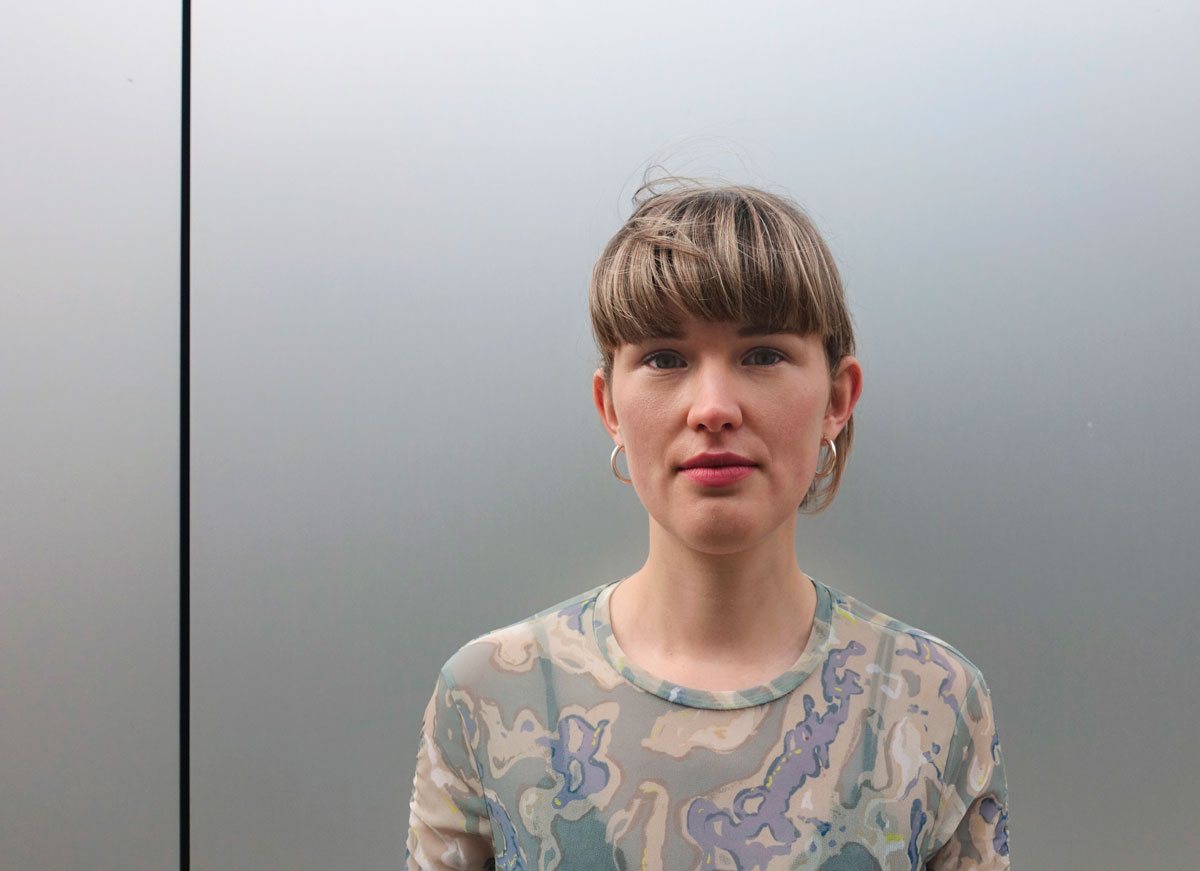 What are your aspirations for your future work life?

Being trained at the intersection of natural science and architecture enabled an expanded understanding and thinking that breaks the divide between nature and culture, building and landscape. I see myself continuing to lay out entanglements and explore the complex spatial systems in order to create spaces of co-habitation and more distributed agency. In light of the current crises, where just now a global pandemic puts expectations on hold, I see myself obliged to contribute. Acknowledging climate change as the current condition of our world, I aspire to a career that advances better social and ecological outcomes through the shaping of the built and natural environments. However, for me, the landscape architectural practice can play out its capacities to design beyond the physical.

Why did you choose to be a member of Danske Landskabsarkitekter?

I became a member of DL shortly after I moved to Copenhagen. The association has been really supportive to settle into a professional community. Newsletter, magazine, and events facilitate exchange of knowledge and promote collaboration. As a student member, I could benefit from DL’s travel grant that supported our study trip to Rome in 2019. Now I am looking forward to having a platform to stay connected. 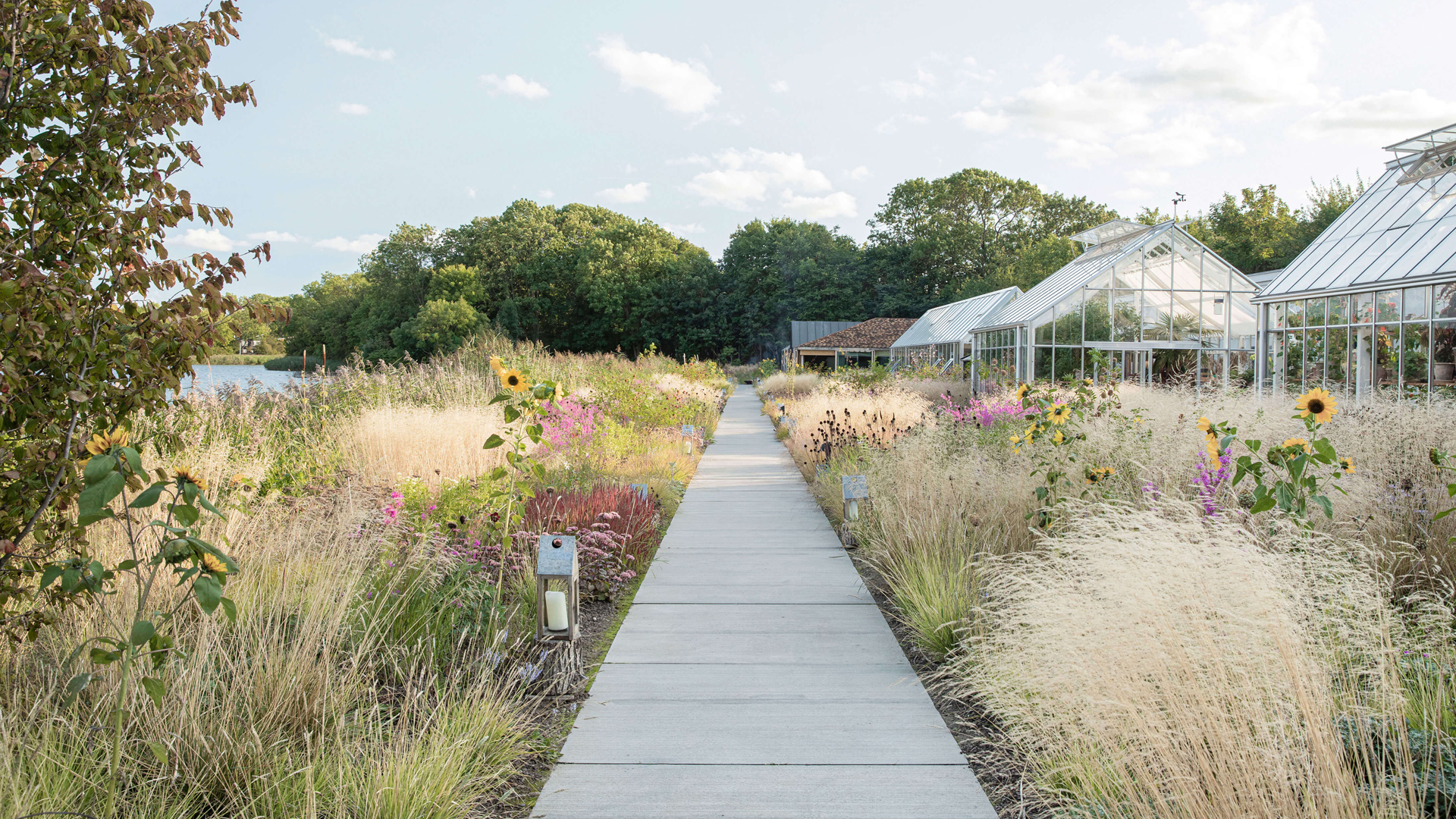